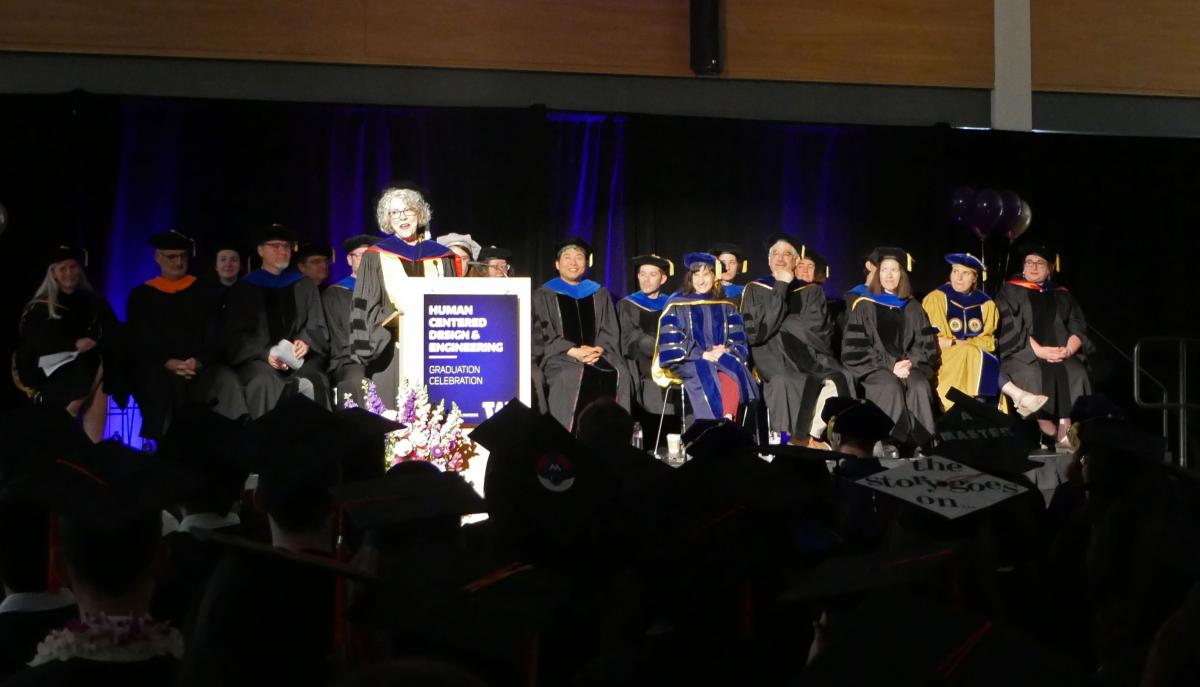 Dr. Brenda Laurel delivered the 2019 Commencement Address for the Department of Human Centered Design & Engineering. The text of the address is below.

Good morning! It’s an honor to be with you on this important day! I’m an actor and a storyteller, so getting me to talk for just a few minutes is like putting me into size 2 shoes, but I’ll do my best.

You move today from the promise you’ve shown as students and makers to a future filled with deep uncertainties. Now, my new colleagues, is when you roll up your sleeves in a different role. You are no longer students – you are full-fledged agents of change. Your choices and actions will influence the future of our civilization. Civilization is understood by its arts and technologies, yes, but most of all by the values of its people and how they are enacted in its government and culture.

Today the deck of the future seems stacked against us. Technology and society change as fast as policy and climate. Surges of entrepreneurial mania and sudden millionaires are changing the characters of great cities and the values of entrepreneurs themselves. Jobs that once had benefits dissolve into the “gig economy.” How do we situate our work in this ever-morphing context?

You’ve heard of people who worked for the same company for 30 years, but those days are passing away. Big players in tech have laid people off since the industry started - I’ve been laid off four times in my career. Why, my husband and I were both laid off on Halloween from Sun Labs wearing our Star Trek uniforms. One minute you’re in the happy corporate family and the next you’re outside the door – in your Star Trek uniform. We can’t attach to companies like barnacles to a boat – the barnacles always get scraped off when someone wants to make the boat move faster.

We can’t name our professions when we don’t know what tomorrow’s work in our field will look like. How do you construct your identity moving forward?

Most of us just try to grab the wheel of our lives and hold on.

But as Robert Hunter wrote and Jerry Garcia sang with the Grateful Dead,

So what are you going to do with all that you’ve accomplished, learned, built, and imagined? How will you intersect the future? What will be your contributions to tech, society and culture?

I can’t tell you what but I can tell you something about how. At 68 I’m officially an OG (old guy) so I have the benefit of a fair amount of experience.

That means you’re finally going to get enough sleep! Do it! Tonight!

In the tech industry a key phrase is “crunch time.” This is practically lethal – it accounts for suicides, strokes, and other kinds of deaths in the game industry. Stay grounded and remember that you can work better when you don’t succumb to shock-the-monkey-style stress. Form good habits for sleep, exercise, drinking lots of water, and eating healthful food. Get up and walk around. Cultivate self-awareness. When you get depressed or stressed out for heaven’s sake talk to somebody about it. And as Kurt Vonnegut advised grads at MIT a few years ago, floss, stretch, sing and wear sunscreen.

Interactive media can be very democratic. Or not. Question consumerism – that’s the practice of creating desires and needs in people then profitably fulfilling them. Consumerism makes customers into marks. Consumerism is what makes us want to buy little plastic thingies that end up in the bellies of fish. Question it.

Question the Spectacle. That includes consumerism, news, politics, entertainment, advertising, and social media. What is really going on? When someone or something manipulates emotions, question intent. When you find yourself doing the same – because we deal in emotions – check in with your own intents. Are they for the Good?

Question surveillance. It’s not just about privacy any more. Look at how Chinese surveillance is enslaving the Huigar minority in their country. This could happen anywhere. And it does.

Read, even if you think you don’t have time. Read history, fiction, science. Connect to emerging ideas. Read about things you don’t know yet.

Always pay attention to the individual people for whom your work is intended. Prioritize human-centered research – even when the client balks at the cost. If your product or service doesn’t meet people where they are, it’s probably not going to work. I know you know this.

Go beyond your comfort zone. When a friend approached me in 1976 to create videogames for an early home computer, I could have said, “I’m an ACTOR, not a PROGRAMMER!” Instead I took the leap, found common ground with the theatre, and made myself a pretty bad-assed career. I also failed hard-core more than a few times. I thank my husband for teaching me this rubric: “This is not my last good idea.” Know that everyone who’s actually trying fails sometimes, but be sure to have interesting failures –failures that help you learn and grow.

Here endeth the graduation-y advice. It’s necessary but not sufficient. I began this talk with a riddle from the Grateful Dead:

There is a way out of this conundrum and here it is:

BE THE THUNDER. BE THE LIGHTNING.

You see the wisdom of it? I want to tell you about two designers who are heroes to me and I hope you’ll get to know their work better – a great way to start your post-graduation reading!

Indigenous designer Elizabeth LaPensée is Anishinaabe, Métis, and settler-Irish. She grew up making art and helping her mother, a scholar in Indigenous film and science fiction, curated VHS tapes, and listened to her practice her lectures. Early on, Elizabeth gained a reputation for her mixed media art.

Today she is a PhD, an award-winning designer, writer, artist, and researcher who creates and studies Indigenous-led media like games and comics. She is an Assistant Professor of Media, Information and Writing as well as Rhetoric and American Cultures at Michigan State University. She is a 2018 Guggenheim Fellow and a mother raising her children.

Her 2017 mobile game Thunderbird Strike created a disturbance. The player controls Thunderbird, a legendary creature from the mythology of some North American indigenous peoples, which flies from the Alberta tar sands to the Great Lakes and along the way attempts to destroy oil industry infrastructure and equipment while trying to revive dead wildlife.

When I asked her why she made the game, she said, “I worked on Thunderbird Strike because I am an Indigenous mother raising my children, and we are passing on these Thunderbird stories in the hope that the water will be well enough for our children and future generations to thrive.”

The game was criticized by the pipe-line advocacy group Energy Builders as “encouraging eco-terrorism.” It had received $4000 in funding from the Minnesota State Arts Board and the Arrowhead Regional Arts Council, and a Republican state senator called for an investigation, but nothing came of that little temper fit. Elizabeth successfully defended her views in the New York Times and elsewhere. The game won the Best Digital Media Work Award at the 2017 imagiNATIVE film and Media Arts festival.

Elizabeth has been a strong founder in the communities of Indigenous Videogames and Comics, and she is far, far from done with her work. Her latest game, When Rivers were Trails, is a retelling of the old game Oregon Trail from an indigenous perspective. How cool is that?

Elizabeth’s advice is: “We each are our own inspiration, along with our communities. To be truly sovereign, we need to develop our own voices through hands-on work as acts of self-determination.”

I’ll leave you with a story about a woman named Donna Cox. I first met Donna on a road trip with Dr. Timothy Leary in Normal, Illinois. (That should be funny to some of you.)

Donna J. Cox is an artist and scientist, and she is anything but normal. She’s chair and professor of art and design at the University of Illinois where she is also Director of the Advanced Scientific Visualization Laboratory. Additionally, she’s Director of Visualization and Experimental technologies at the National Center for Supercomputing Applications. She was named a “modern-day DaVinci” by the Chicago Museum of Science and Industry. Donna was also nominated for an academy award for the supercomputer-animated IMAX film Beautiful Planet.

Early on in her career Donna developed the idea of Renaissance Teams – teams that included people from different disciplines like art, science, cultural studies and computation. Renaissance Teams became her signature strategy. As an artist penetrating the highest bastion of nerditude, she was able to link her idea to the existing scientific practice of collaboration. Her Renaissance Teams – and her insatiable hunger to learn – rolled like a snow plow through all the obstacles in her way.

Her life story consists, as she says, in “turning challenges into opportunities.” Illuminated by her early studies of patterns in nature, Donna has produced and directed amazing films that reveal the un-seeable through super-computer data visualizations, from the birth of the Earth to the collision of black holes, and she creates mind-blowing full-dome planetarium shows.

When I interviewed her, Donna gave me some advice to pass along to you:

“Eighty percent of life is showing up and being there for those opportunities that are consistent with our values. Self-examination, reflection, and adaptability have prepared me to deal with almost anything. Take the time to be self-reflective. Stay open and hungry for learning and experience. Hold an attitude of gratitude. My most profound moments come when I’m operating in the flow – I’m not doing it, it’s coming through me.”

And that’s the LIGHTNING.

You will not be stuck on the wheel. You will BE THE THUNDER AND THE LIGHTNING. I trust that you will. Hearty praise for you on your graduation day! I wish you all a journey filled with productivity, learning, good colleagues, and – above all - hope. Remember, “hope” is not just a noun, you know – it’s an active verb.