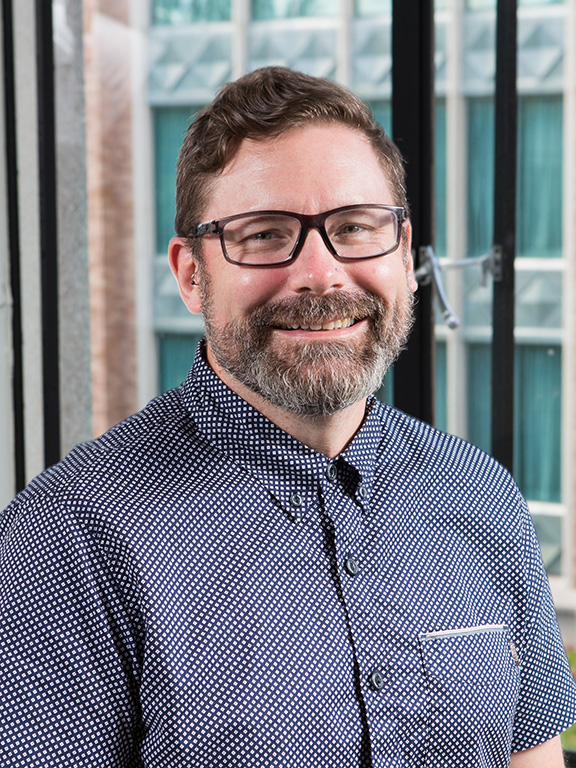 Tyler Fox's background encompasses research and art in areas as broad as posthumanism and physical computing, and he attributes his career to the freedoms allowed by his service in the United States Army.

Fox enlisted in the army after graduating from high school in Silverdale, Washington, in 1992. “I am a first-generation college student,” Fox described. “So, I didn’t quite have a college plan when I graduated high school. I knew enough to know that I wasn’t ready for that step.”

Fox joined the army to be a language translator, and an aptitude test paired his skills with the army’s need for Korean language interpretation. He attended the US Defense Language Institute Foreign Language Institute in Monterey, California, where he studied Korean intensively for one year. From there he went to Texas, followed by Arizona, for additional language and equipment training.

On New Year’s Day in 1994, Fox was deployed to South Korea, where he served as a voice interceptor, working with Korean and American teams to translate spoken Korean. “It was volatile time in Korea. We were working 12 on, 12 off shift schedule due to heightened tensions, and living in the barracks. It was a really tough time.”

After a year serving overseas, Fox transferred to Fort Lewis in Washington state (now Joint Base Lewis-McChord), where he continued active duty for another year.

“My time in the army was a huge moment of transformation for me,” Fox recalls. “It made me suffer through things, and helped me realize that I had the resolve to make it through. What it really did was set me up for success in college.”

After four years of service, Fox made the transition from army sergeant to college student in 1996. He transferred his language course credits to begin an associate’s degree at Seattle Central Community College, and then to the University of Washington where he pursued dual degrees in in Art History and Comparative History of Ideas.

“When I started at UW I was really interested in being an art historian,” Fox described. “Thanks to conversations with my professors in Comparative History of Ideas, I discovered that what I really wanted to do was be an artist.”

While a senior at UW, Fox received the Bonderman Travel Fellowship, a six-month solo travel fellowship awarded annually through the UW Honors Program and the Graduate School. Bonderman fellows focus their experience on exploring cultures, peoples, and different areas of the world. Fox welcomed the opportunity to seek out art in different geographic and cultural contexts as he traveled to London, Turkey, India, Thailand, and Malaysia. “I was exploring the transition between studying art and making and doing art,” Fox described. “I also learned through the process that I wanted to go abroad for graduate school. I discovered it is very different when you are traveling through places than it is to live there. I wanted to really be immersed in a new environment as a student.”

After returning to UW for several years working on staff to grow the Comparative History of Ideas international programs, Fox moved to New Zealand where he attended graduate school at the Elam School of Fine Arts, University of Auckland. He completed his MFA in Intermedia, which includes experimental video, interactive video, and video arts.

In 2015, he earned his PhD from the School of Interactive Arts & Technology at Simon Fraser University in British Columbia. His dissertation, "Transductive Praxis in BioArt: Relational Ontology and Aesthetics of Nonhuman Experience," explored his own artistic practice, the relationship between humans, and nonhumans and the philosophy of technology.

Before joining the HCDE faculty as a lecturer in 2016, Fox was a lecturer in the school of Interdisciplinary Arts & Sciences and Studio Director of the Interactive Media Design program at the University of Washington Bothell.

So far, Fox has taught HCDE courses in user-centered design, organizational teamwork, master's capstone, and he developed a new course for the department on communicating with video. He has also led students in HCDE research groups on designing interactive screens for the campus environment and designing displays using bioluminescence.

Fox’s time in the army still defines who he is today. “Thanks to the army I gained strong self-discipline skills, and I think I can manage high-stress situations well. I also still get up incredibly early, like 5:30. It’s often when I get some of my best work done.” His experience being a vet and a first-generation college student also influences his interactions with students. “In the classroom I try to honor the diverse backgrounds of my students, and do my best to be compassionate to their needs in that way,” he described.

“Thanks to the Army, my college experience was exactly what it is supposed to be. It gave me the freedom to carve my own path, experiment, and see what was possible. And I’m here today as a faculty member because University has given me so many opportunities along the way. ”