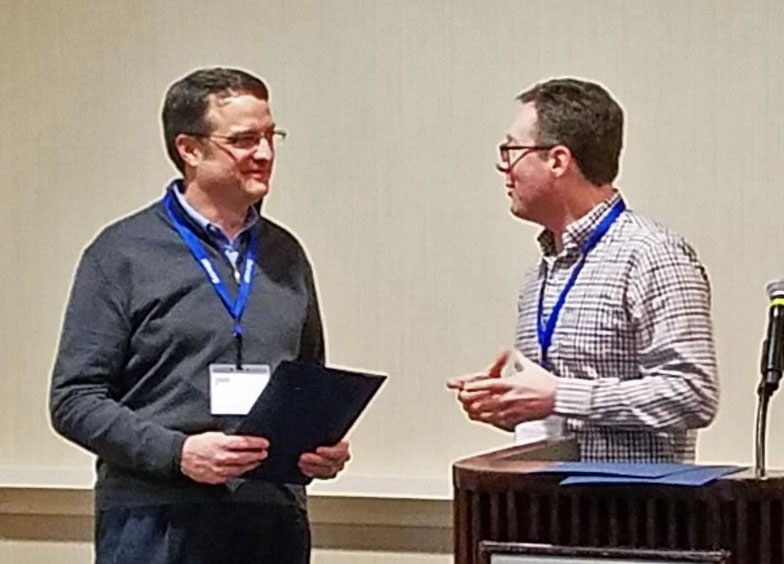 Professor Bill Hart-Davidson, past president of ATTW and associate dean at Michigan State University congratulates Professor Zachry on being elevated to Fellow of ATTW.

Mark Zachry, professor of Human Centered Design & Engineering, has been named an ATTW Fellow by the Association of Teachers of Technical Writing. This honor recognizes Dr. Zachry for his scholarly productivity, leadership, and service.

Zachry accepted the honor at the annual ATTW conference in Pittsburgh, PA, on March 13, 2019. In a statement about Zachry's contribution to the field, Professor Bill Hart-Davidson, associate dean at Michigan State University, wrote "It is not an exaggeration to say that Mark is among the most respected and valued members of the field of Technical Communication. This is all the more true for the way his work has pushed the field to become more interdisciplinary, to engage with allied areas of interest such as Human-Computer Interaction and Computer-Supported Cooperative Work."

Hart-Davidson commended Zachry's contributions to the field, including the widely cited and influential piece "Genre ecologies: an open-system approach to understanding and constructing documentation," published in 2000 with Clay Spinuzzi. "Indeed, the genre ecologies framework proposed in that piece has gone on to become a generally accepted model in the field, though at the time the core ideas were quite new and disruptive of both theoretical and pedagogical approaches to the genre. The central implication of the genre ecologies framework argues that the scope of research on written discourse must shift, dramatically, from a focus on relatively discrete communicative artifacts (texts) to a system of interdependent communicative actions. Not a subtle shift. It was a shift that literally demanded whole new research traditions in the field. And it turns out to have been an important change that presaged the networked, social-media saturated world we live in today," wrote Hart-Davidson.  “In the last ten years or so, Mark has encouraged this kind of work by writing about research methods and mentoring graduate students in a highly productive research group at the University of Washington.”