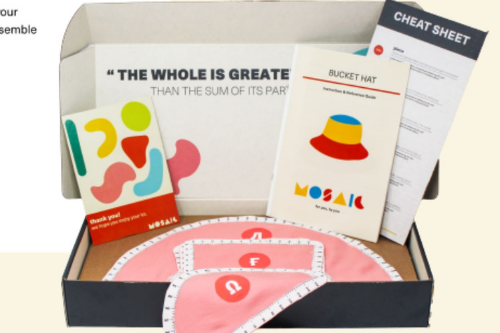 A team of HCDE students recently launched MOSAIC, the first DIY sewing kit from their new company Novoloom. MOSAIC can be purchased on their website or Instagram shop.

On the week of March 9, 2020, Google searches for “how to sew” began an unprecedented liftoff, rising to nearly 500% by April. Retailers struggled to keep their shelves stocked with sewing machines as the world scrambled to learn how to make their own masks. But as mask mandates begin to lift in the United States, many new sewists are now asking themselves: what’s next?

As many experienced sewists will tell you, making the leap from stitching together the simple, congruent edges of a cotton face mask to constructing more complex garments may not be as simple as one would hope. For years, Sabreen Mohammed had been trying to get the kind of clothing that she could never find in stores. She eventually gave up on the online shopping hunts and decided to learn to sew them herself. After searching around for how to get started, she was taken aback by how uninviting the craft could be. As an avid watcher of Project Runway in her childhood, Mohammed was disappointed to learn that making a wearable piece of couture not only required a lot of upfront investment in specialized tools, but also years of experience to learn to use the tools well.

According to Mohammed, sewing has a bit of a design gap. First-time users of sewing patterns, a sort of blueprint used to cut and sew clothing, will notice how visually overwhelming they are. It is typical to see instructions in multiple languages crammed into the spaces between several size variations of the same garment. All of this information is overlaid on the same tissue paper, which is to be carefully pinned onto fabric and traced without wrinkling. The prerequisite attention to detail, along with the jargon needed to comprehend much of the sewing content online, make for a challenging experience for most sewing beginners. The craft is also generally not accessible to individuals with various physical, sensory, and cognitive conditions, excluding them from enjoying the craft altogether. 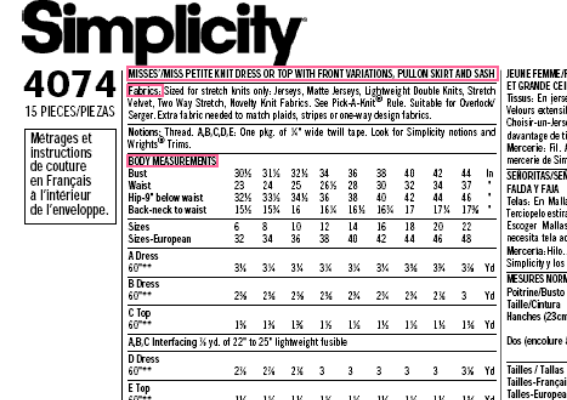 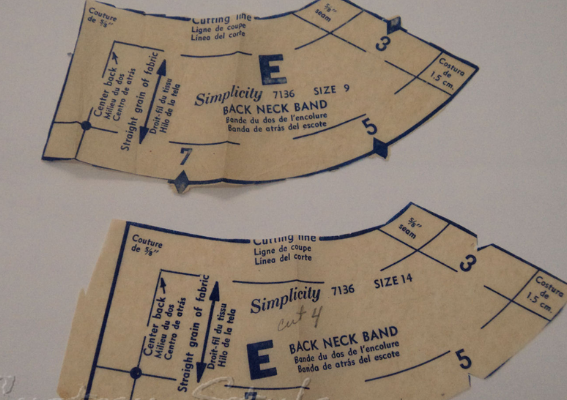 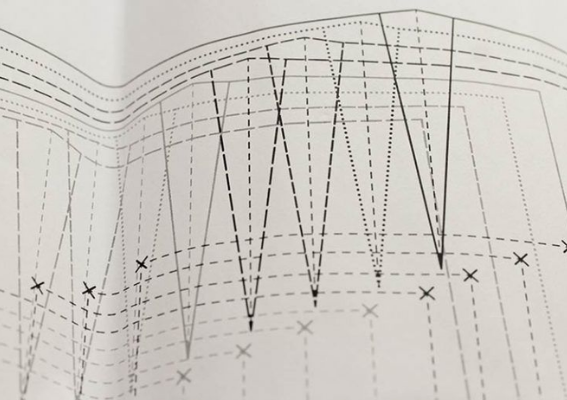 Traditional sewing patterns can be difficult to understand for first-time users. Even those with experience find that the patterns contain a lot of irrelevant information. This may lead to more mistakes and is not accessible to those with physical, sensory, and cognitive impairments. 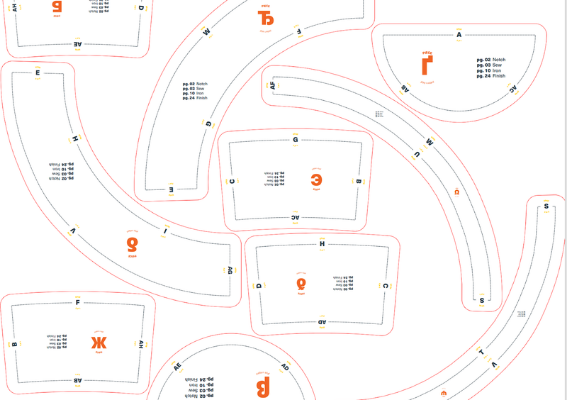 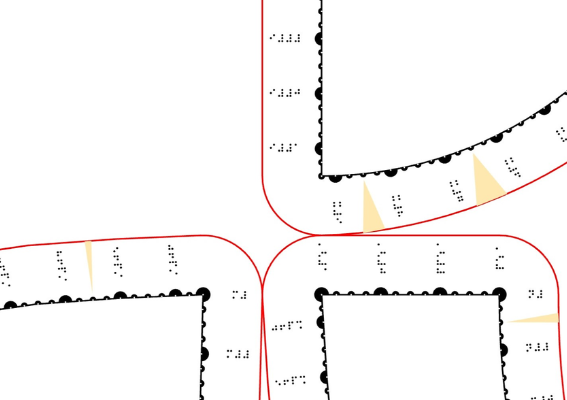 Next steps for the team includes making the patterns more accessible by adding tactile markers.

Mohammed wanted to make sewing more like knitting, which is often done while relaxing, watching TV, or talking to friends. Her instructors, Professor Mark Zachry and PhD student Regina Cheng, gave her the greenlight to organize an HCDE senior capstone project surrounding the problem. The innovative work produced by the team went on to win awards at competitions and showcases. Mohammed says the success of the project was owed to the interdisciplinary synergy that formed within the team, which includes Kevin Kuo, HCDE student double-majoring in Marketing; Grace Barar, HCDE student minoring in Digital and Experimental Arts; and Nadir Tareen, an HCDE student who works with various computer science, bioresource engineering, environmental health, and entrepreneurship students across UW departments. Their project, which is now an incorporated company, is called Novoloom.

Team Novoloom at work on their HCDE Capstone project in 2021.

Together, Team Novoloom researched a host of other problems in the fashion industry, from the exclusion of minorities to dangerous factory conditions. “I would say shopping for clothes is a stressful experience because I feel like I have to really mitigate my expectations about finding something that I like and feel comfortable in and fits what I want to present as”, noted one of the team’s user research interview participants. For many participants in interviews who were focused on gender identity and those centered on the experiences of ethnic minorities, finding clothing that both fit their physical body and accurately expressed their identity and aesthetic preferences was difficult and sometimes traumatic.

To address problems with sewing and the larger fashion industry, the team created a website where users can customize an item of clothing they wish to own. Almost like being a contestant in a virtual Project Runway episode, users can use the site to sculpt a design, pick out sustainable fabric and trims, upload prints, and customize the fit. Using the prototyping tool Framer, the team replicated the process of ordering and customizing the ready-to-sew clothing kits.

According to Mohammed, custom measurements are key. “An inch is an inch and a centimeter is a centimeter,” she said, referring to the dizzying lack of coherency in apparel sizing systems. “There is no such thing as a woman inch or an Asian inch, or a petite inch or a plus-size inch. Every outfit can be made with exact measurements that you provide if you can get those to us.” The team also explored ways to make self-measurement easier, from 3D scanning with iPhone cameras to easy YouTube tutorials. All working demos of the site can be found at Novoloom.com, but a sneak peak of the next release can be found here. The interface redesign was led by HCDE student Nadir Tareen, who decided to use new design-to-code digital prototyping technology to ensure that the site could be easily implemented and launched in the future. “As you make changes to the outfit, we simulate it for you so that you can get a good idea of what you’ll be wearing,” Tareen said.

The user’s virtual custom garment is then automatically compiled and turned into a fully made-to-order DIY kit, which is mailed to their doorstep. Called MOSAIC Kits by Novoloom, these compact packages include all of the garment pieces, tools, and simple instructions that are only written in your language, and custom-generated to depict only your unique project. “We are like the IKEA of custom clothing”, said HCDE student Grace Barar, speaking of the furniture giant famous for flat-packing their furniture to be assembled by the buyer. Barar, whose own sewing journey led to her interest in e-textiles and soft-circuit wearables, spearheaded the instruction manual design as well as the development of MOSAIC’s brand identity.

The team hopes that MOSAIC by Novoloom will empower people to feel more ownership over their fashion choices while addressing the problem of "fast fashion" and the unsustainable and unethical practices that go along with it. Their three rounds of usability testing not only helped inform their designs, but also revealed promise and real-world viability of the kits as a product. “We had to get creative with testing our physical prototypes in a pandemic,” said HCDE student Kevin Kuo, the team’s research and testing lead. Kuo crafted a usability testing protocol that combined elements of an interview, survey, and a virtual diary study to overcome physical distancing mandates. 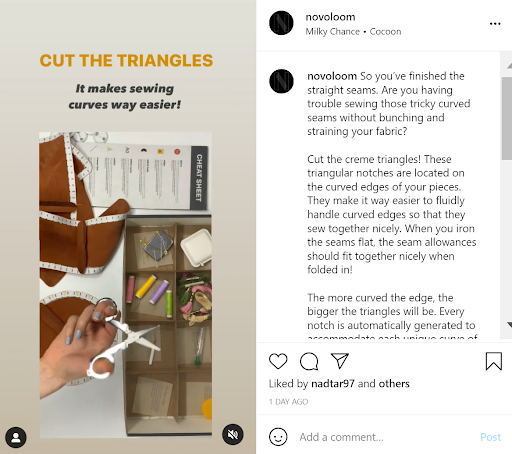 At the HCDE Capstone Showcase in June 2021, a panel of judges awarded Mosaic the undergraduate capstone award for Excellence in Engineering. "Fantastic execution," said one judge, and "the team made great effort to conduct market research and the design was attractive from usability and digital prototype perspectives," said another. Co-founders of Novoloom Sabreen Mohammed and Daaniya Iyaz recording a pitch to apply to a local accelerator. Daaniya (left) is wearing a bucket hat made from a Mosaic Bucket Hat Kit, while Sabreen is wearing a crop top made from an upcoming kit.

MOSAIC by Novoloom’s journey is only beginning. The team is rounding out their capstone experience by launching their first product, a DIY Bucket Hat Kit. Mohammed recently finished working on a utility patent application with attorneys at AEON Law to patent the software process that generates manufacturing files for the kits, which has been in the works since she joined HCDE in 2018. The team was also part of the Spring 2021 cohort at the UW Entrepreneurial Law Clinic, in which a team of MBA students, law students, and industry attorneys advised them on everything from opening their first company bank account to issuing company stock. They plan on adding dress and shirt kits throughout the summer, and have recently created a YouTube channel for sew-alongs and how-to videos.

In the coming years, the team plans to expand usability testing and experiment with tactile sewing guides and different instruction modalities to ensure that their kits can be enjoyed by anyone who wants to make their own clothing. “I even tried using Novoloom for my Neural Engineering capstone project. I was designing a made-to-measure electroencephalogram (EEG) cap that’s got a snug fit but is embedded in an ordinary looking bucket hat, so that you don’t have to deal with the stigma if you have to leave the house with EEG monitoring on,” said Mohammed. “The possibilities are endless.”

Find more information and order a kit here. View the team's project video for Mosaic below.

About the HCDE Capstone Team

Sabreen Mohammed is the physical prototype lead, Grace Barar is the visual design lead, Nadir Tareen is the digital prototype lead, and Kevin Kuo is the user research lead. To contact the team, please visit their website at about.novoloom.com or email contact@novoloom.com.