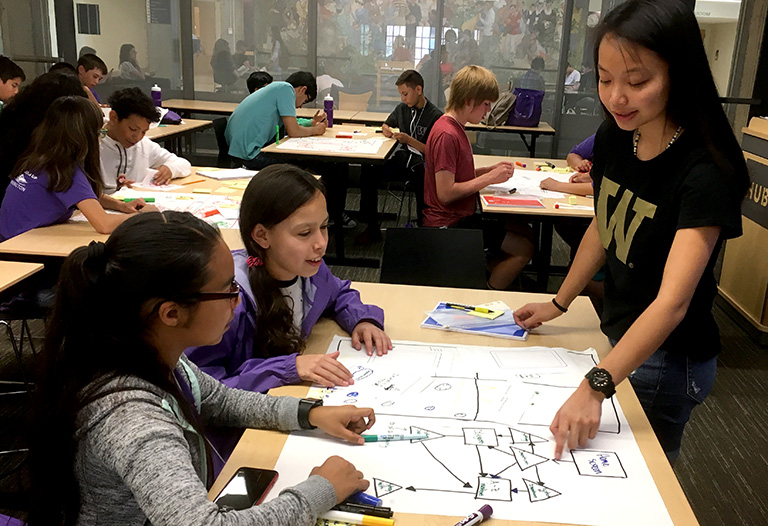 An HCDE student provides feedback to middle school students on the interaction flow for the app they are designing during a charrette. Interactions.

In the article, Human-Centered Design Charettes for K-12 Outreach, Agapie and Davidson describe their efforts building an outreach program to introduce young learners to human-centered design, and more generally to STEM disciplines.

A key component of HCDE's outreach program is that it empowers current HCDE students to develop and teach outreach workshops for the younger students. The workshops, taking the form of a design charette, are fast-paced, hands-on, and are customized for each group of participants. Activities are centered around foundational aspects of the user-centered design process, including design thinking, user research, and prototyping. The charettes are tailored to fit the needs and interests of the students, and can be adapted to suit different grade levels and classroom settings.

Through the HCDE outreach program, HCDE faculty and students have worked with thousands of K–12 students across the state of Washington.

In the article, Agapie and Davidson provide an example of a charette in which the K-12 students were given a design challenge of developing a citizen-science application:

In one charrette conducted in a coastal town, they were asked to create an app that allows a person in their community to collect information that helps scientists learn something about a topic. Students brainstormed about potential users and chose one as a target client. In this case, students chose to design an app for local fishermen. They identified the fishermen’s needs, which at the time were concerned with a declining salmon population. The students drew storyboards with the scenario describing how the fishermen would use the app: to help scientists track salmon-migration patterns and understand where the fish are (or aren’t). They created interaction flows highlighting the structure of the app, sketched screen interfaces, and developed an interactive prototype of the app using the Marvel software tool. At the end of the workshop, the students demonstrated their prototypes for this salmon tracking app. We found that design challenges such as citizen science are effective at creating engagement throughout the design process for students in both middle and high schools in a variety of courses.

Agapie and Davidson's article functions as a guide to help other academic programs design STEM outreach efforts for K-12 audiences. "This type of initiative can empower undergraduate students to serve as role models to younger students, to better understand their own field, and to learn how to communicate to all audiences," the authors describe in the article.

Interactions magazine is published bi-monthly by the Association for Computing Machinery (ACM), the largest educational and scientific computing society in the world. It is the flagship magazine for the ACM's Special Interest Group on Computer-Human Interaction (SIGCHI), with a global circulation that includes all SIGCHI members.