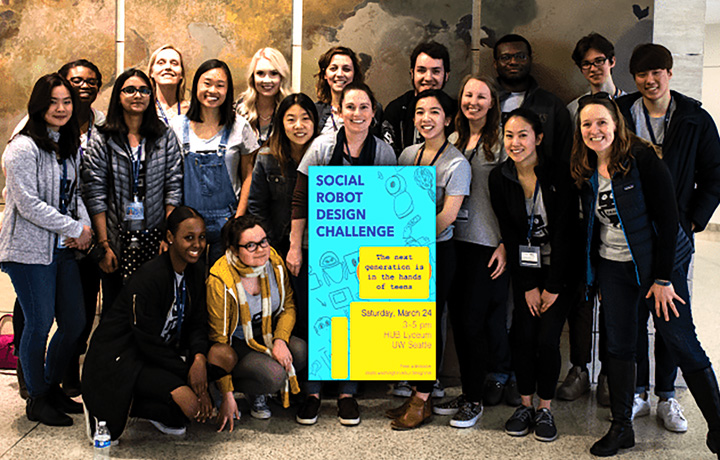 Teenagers experience high levels of stress in their lives, resulting from school, relationships, and family life. Research has found social robots useful in providing support for people and for gathering information about their environments, however there is little research about how teens and robots interact.

In a winter quarter Directed Research Group, the team aunched a high school design challenge to prepare teens with the necessary tools to design and prototype their own robot concepts. These high school students were asked to design a robot that would live at their school and help to reduce stress. The teens learned the human-centered design process and then spent 4-8 weeks to design their prototypes. The high school teams were coached by UW students and faculty.

In March 2018, the teens visited campus to present their prototypes to a panel of experts at the Social Robot Design Challenge Showcase. Panelists include Maya Cakmak, director of the Human-Centered Robotics Lab; Sean Andrist, researcher at the Microsoft Research Perception and Interaction group; Guy Hoffman, assistant professor of mechanical and aerospace engineering at Cornell; and Sures Kumar, interaction designer at Google’s Research & Machine Intelligence team.

The Project EMAR team summarizes the results of the Social Robot Design Showcase:

To say we were blown away by the prototypes that high schoolers brought to the showcase is an understatement. The showcase was a HUGE success as were the teens’ creative and inspiring ideas. After spending the past two months exploring the human centered design process, high school students from seven schools made their way to UW Seattle to showcase their final prototypes! 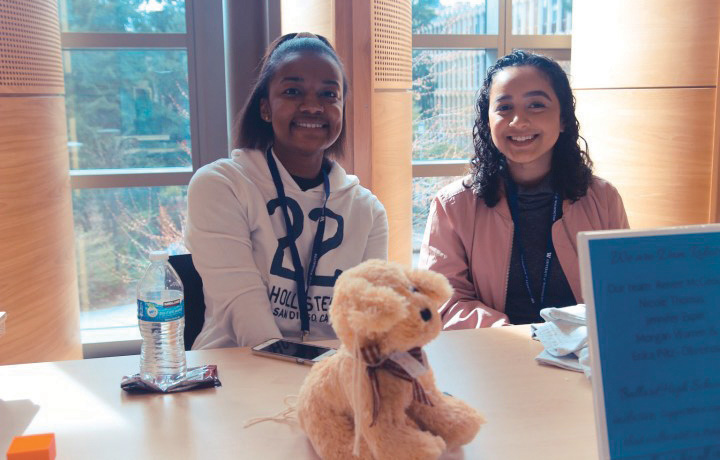 Girls Who Code club members represented Ballard High School at the showcase with their prototype, Lucy. A small, fluffy “dog” on wheels, Lucy is designed to relieve stress by listening. To show that she’s listening, Lucy responds by barking, wagging her tail, and moving her ears. Students at Ballard received the “Most Insightful” award for their prototype. 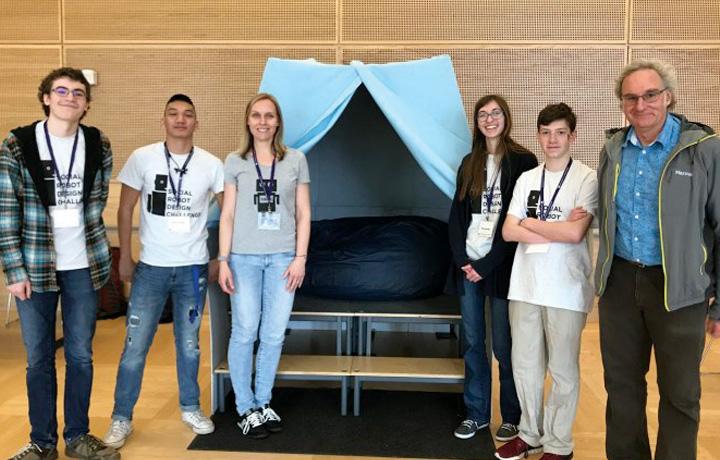 Students from Nathan Hale invited guests into their social robot relaxation room. The relaxation room features a comfy bean bag chair for stressed teens to lay on while they listen to music to destress. The team recognized that each student has different needs to help them relieve stress, so a voice user interface allows each user to customize their experience. The team from Nathan Hale received the “Most Out of the Box” award for their design. 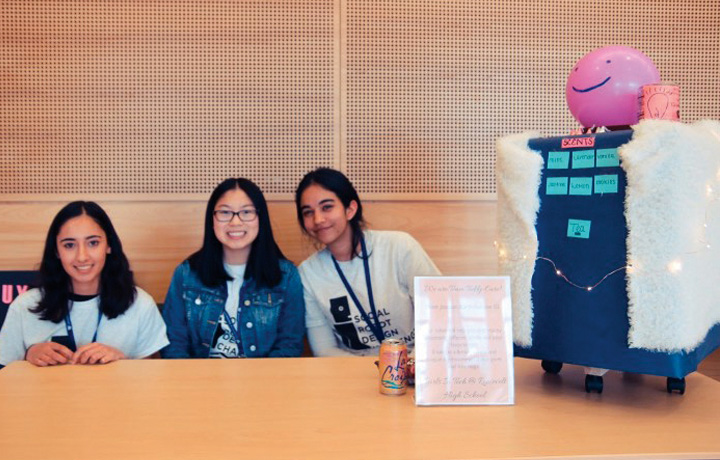 The Girls in Tech team from Roosevelt High School showcased Joaquin Bartholomew III: a social robot with a removable fuzzy exterior perfect for hugging. Joaquin Bartholomew III is able to play music and speak to students in different accents, in addition to offering soothing essential oil fragrance options to help stressed teens relax. The Girls in Tech team were awarded the “Most Friendly” from the judges at the showcase for their prototype. 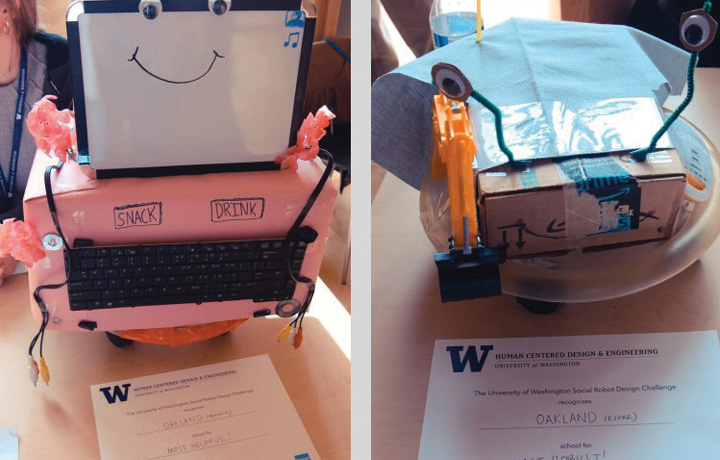 Students from Oakland High School showcased two unique robot prototypes at the design challenge: Petunia and ESPAR. Petunia captured the audience’s attention with her cute boxy design. Petunia intends to relieve teen stress by supporting students’ academic success with her resourceful and helpful demeanor. Petunia was awarded “Most Helpful” by the judges at the showcase. Oakland’s ESPAR (Emotional Support Play and Recreation) is a helpful robot who can help students by grabbing, fetching, and carrying items for students. ESPAR aims to reduce teen stress by giving emotional and motivational support to students in need. ESPAR was awarded “Most Robust” by the judges at the showcase. 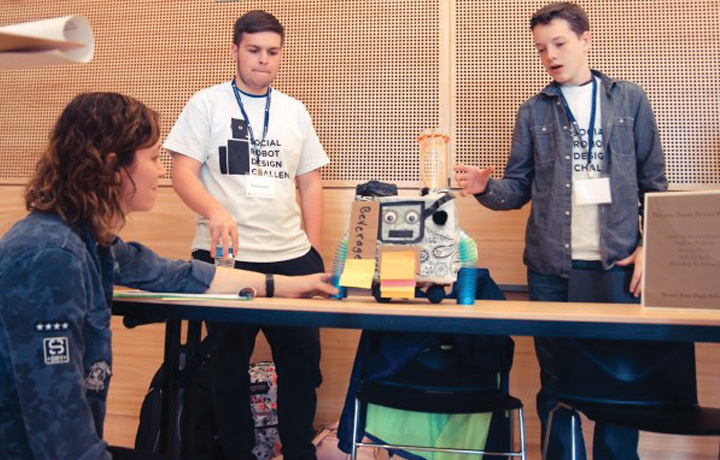 Students from Foss High School debuted their social robot, Boom Boom, at the showcase. Boom Boom speaks to stressed teens in a voice that sounds like Speedy Gonzales, having therapeutic conversations to help reduce stress. Boom Boom also has the ability to dispense candy and beverages to students to brighten their day. The students from Foss were awarded “Most Versatile” for their prototype. 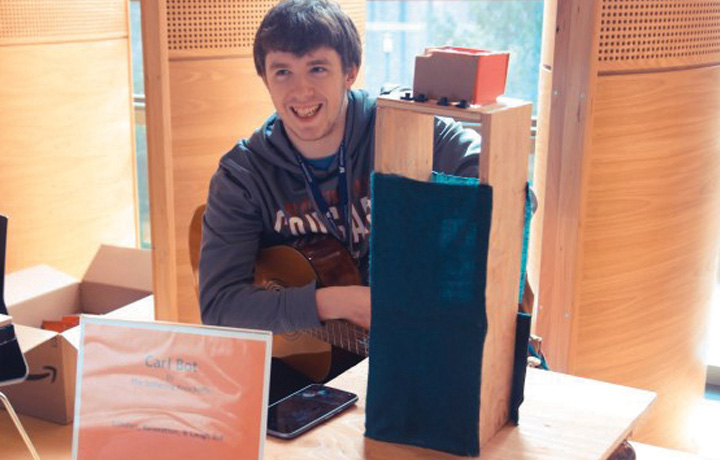 Students at SAMI presented CARL Bot: The Comfort and Relaxation Laugh Bot. CARL Bot speaks to users in different tones of voice, quoting Morgan Freeman and a “whacky YouTuber” to help reduce stress. CARL Bot can be found rolling around on caster wheels while playing calming acoustic guitar music when not interacting with teens. CARL Bot was awarded “Most Adaptable” at the showcase.