Field Trial of Tiramisu at CHI 2011 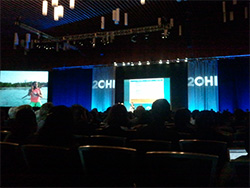 This past May, I had the opportunity to attend the CHI 2011 conference in Vancouver, Canada. CHI is considered one of the premier conferences in the field of Human-Computer Interaction, so I was lucky that it was being held just a short drive away! According to the conference website, this year's conference drew more than 2500 professionals from over 40 countries, and featured over 800 works. With so many interesting papers being presented, it was difficult to filter and prioritize what sessions I wanted to attend.

I was especially excited to be attending this year's CHI conference because I co-authored a paper that was awarded "Honorable Mention," which is given to the top 5% of submissions. My contributions to this project and paper occurred just before I joined the HCDE department. Our paper, titled "Field Trial of Tiramisu: Crowd-Sourcing Bus Arrival Times to Spur Co-Design," reported the results from a field trial of a social computing system that allows transit riders to crowd-source real-time arrival information by sharing GPS traces from their mobile phones.

CHI proved to be a great venue to network with other researchers and practitioners with similar interests. The evening receptions hosted by various departments including DUB allowed me to have conversations with other researchers in a casual setting. Additionally, I was also able to reunite with my old colleagues from Carnegie Mellon and share my experiences as a member of the HCDE department, and make my pitch for them to join me in the HCDE department!